Here is a quick rundown of each side and their past history in qualifying for global finals.

BOTSWANA
Botswana are basking in the glory of knocking South Africa out of the qualifiers for the 2020 Tokyo Olympic Games, which will have served as a boost to women’s football at all levels in the country.

It will no doubt serve as a motivation to the girls that compete in the 2019 COSAFA Women’s Under-17 Championship as they seek to be part of a nation on the rise in football.
Botswana entered the qualifiers for the 2008 FIFA Women’s Under-17 World Cup but withdrew before their tie with South Africa.

They entered again two years later, but 9-1 and 13-0 losses to South Africa meant a humbling 22-1 aggregate defeat.     That did not deter the side though and in 2012 they took on Zambia, putting on a better showing as they lost 5-1 and 2-0 in the respective legs.

They met Zambia a year later and this time went down 8-3 on aggregate after 5-2 and 3-1 losses, but again showed they were closing the gap.    That was proven again in the 2016 qualifiers as they were edged 3-2 on aggregate by Namibia after a 1-1 draw and a 2-1 defeat.

They finally made it past the first round in extraordinary fashion for the 2018 qualifiers. Trailing 5-2 from the first leg against Zambia, they roared back to win the second 4-0 and take the tie 6-5 on aggregate.

That set up a second- round meeting with South Africa, where they again held their own, but lost 5-2 and 6-4 in the two matches.

There is no doubt that they are a side on the up though and will this year be coached by Tapaphiwa Gaebolae.

COMOROS ISLANDS
Comoros have been rare participants at this age-group level in women’s football and have yet to enter the African qualifiers for the FIFA Women’s Under-17 World Cup.That could change though as they move into a new era of competition at this level.

MADAGASCAR
Madagascar are another side who are looking to take their bow in theFIFA Women’s Under-17 World Cup qualifiers in the future, so this tournament will be an excellent providing ground for them.

MAURITIUS
Hosts Mauritius have shown a renewed interest in the women’s game in recent years at senior level and will now also translate that into the Under-17 age-group.

They too have never entered the FIFA Women’s Under-17 World Cup qualifiers before ahead of the next finals in India in 2020.

The team will be coached by senior women’s team boss Kofi Kawata. 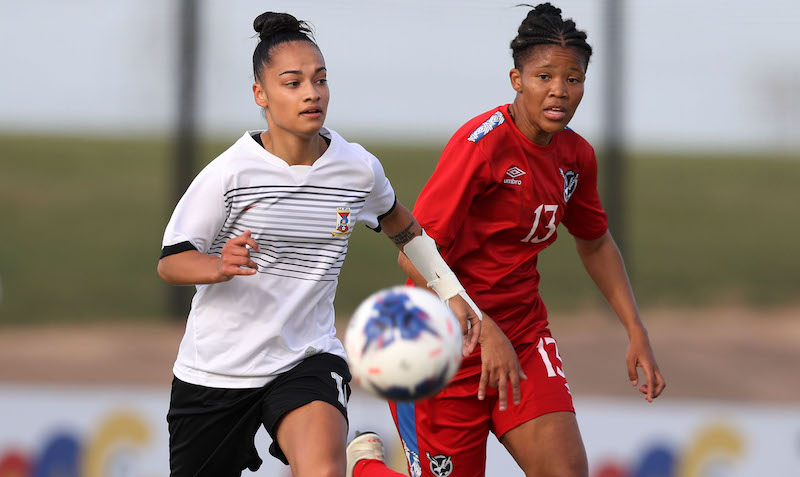 SEYCHELLES
Another of the Indian Ocean Islands that are trying to push the women’s game, Seychelles will make their debut at a COSAFA women’s football event. They have also never competed in theFIFA Women’s Under-17 World Cup qualifiers previously.

SOUTH AFRICA
South Africa are the most successful of the COSAFA nations in this age-group having twice before qualified for the FIFA Women’s Under-17 World Cup in 2010 and 2018.    Their first shot at the global finals came in 2008 when they lost 3-0 on aggregate to Cameroon in the second round after having a walkover win over Botswana in the first.

They humbled Botswana 22-1 over two legs in the 2010 qualifiers, but then lost 7-1 on aggregate to Nigeria to miss out on an automatic place at the finals.     They went into a play-off with Tunisia though and after a 1-0 away win and 1-1 draw, booked a place in Trinidad & Tobago.

There they found the going tough, with defeats to South Korea (1-3), Germany (1-10) and Mexico (0-4), but several that squad, including Robyn Moodaly, Jermaine Seoposenwe and Kaylin Swart have gone on to have successful careers.

South Africa beat Namibia 6-1 on aggregate in the qualifiers for 2012, but a 5-1 aggregate loss to Ghana in the next stage meant there would be no finals for them.

A year later they were surprisingly defeated by Zambia in the second round after a 3-3 away draw was followed by a 3-1 home loss. In 2015 they received a walkover win over Zambia, but in the final stage of qualifying lost 7-0 on aggregate to Nigeria.

They were back at the global finals in 2018 though as a 11-6 aggregate win over Botswana was followed by a 6-1 aggregate success over Morocco.     They meant they played at the FIFA event in Uruguay, where they again showed improved performance, but could not get out of their pool.

They have retained their coach from that competition, Simphiwe Dludlu, for this COSAFA event.

UGANDA
East Africa guest nation Uganda will make an appearance at the2019 COSAFA Women’s Under-17 Championship as they bring some flair and a different continental style to the competition.

Uganda have never appeared in the FIFA Women’s Under-17 World Cup qualifiers but having appointed coach Ayub Khalifa to their team this year, could change that in forthcoming editions.

ZAMBIA
Zambia are the only other Southern African nation to appear at the FIFA Women’s Under-17 World Cup after they contested the 2014 finals in Costa Rica.    They first entered the running in 2008 but lost 6-0 on aggregate to Ghana in the preliminary round, and then skipped the 2010 qualifiers.

Zambia defeated Botswana 7-1 in the 2012 qualifiers, but then lost by the same margin on aggregate to Nigeria in the next stage.    They beat Botswana 8-3 on aggregate in the first stage ahead of the 2014 finals and were surprise 6-4 aggregate winners over South Africa following a 3-3 home draw and a 3-1 away win.

They sealed their place in Costa Rica, where they put in a decent showing. They lost their first two games to Italy (0-2) and Venezuela (0-4) but did beat the hosts 2-1 in their last match.

Zambia withdrew from the 2016 qualifiers ahead of their tie with South Africa, and then were surprise 6-5 aggregate losers to Botswana despite leading 5-2 from the first leg.